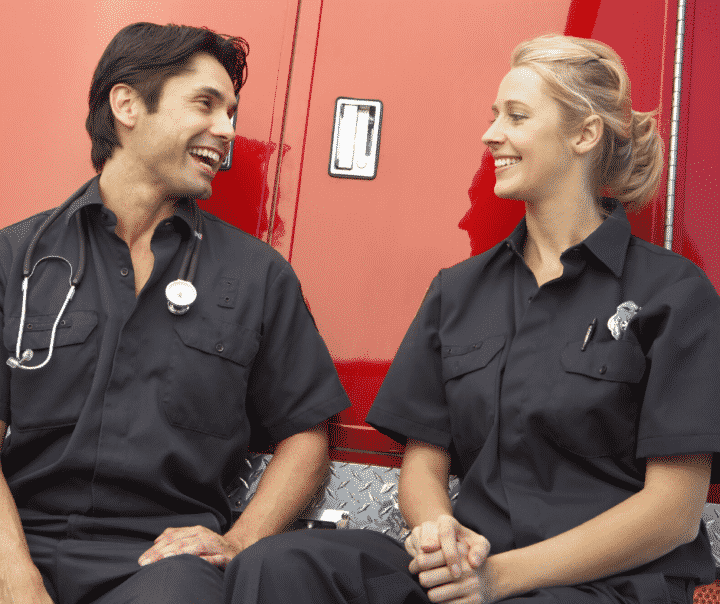 So we did just that, we asked you what your funniest moment in EMS was so far, and here’s what you said.

Anyone want some chicken?

My partner and I were working overtime and been running nonstop all night when we responded to a call of man down in the parking lot of a local pawn shop. It was an hour before the end of our shift and we just knew we would be stuck running this guy to a trauma center (which was an hour away) or something equally assured to make us go home late. On arrival, we found a man laying behind a pickup truck with his pants around his ankles and initially unresponsive to verbal stimuli. I approached closer right as law enforcement arrived and I could then smell the alcohol on him. I managed to wake him up and sit him up, when he told us to leave him alone and attempted to make a fist and swing at me. We backed up and the officer took over, but we remained on scene just in case. The officer asked the man for his identification, and the man reached into his pocket, pulled out, brandished and took aim at the officer with…a chicken quarter! He was gripping the drumstick and pointing the thigh at the officer (whom I still don’t know how he didn’t lose it, for my partner and I could barely breathe we were laughing so hard). The officer calmly replied, “No buddy, that ain’t it,” and stood the man up to search him. The officer reached into the man’s back pocket and withdrew a wad of papers and as his partner now secured the man in handcuffs, he began to search the bundle. After pealing back a few layers, he found…another chicken quarter! My partner and I had to hold each other up as the man was arrested for public intoxication and we tried to get back into our rig. In 20 years on the job, that’s the funniest (and stupidest) thing I’ve ever come across, and I don’t think I’ve ever laughed that hard in my life.

Perfume: Any smell that is used to drown a worse one

I have been an oilfield EMT for 30+ years and volunteered while at home. Once during a blizzard in Alaska we were paged out for a perfume over dose. I had to use my plow truck to pick up other medics and go get the ambulance. 20 mph top speed to a call 30 miles North of the station. As with all OD call’s LEO’s respond. Ours tried to drive his Crown Vic down an unplowed back road. We picked him up and proceeded to the call. After finally finding the patient we got Paul Harvey’s the rest of the story. This gentleman had gone up to his cabin for the weekend. He fired up his oil drip stove to warm it up. While waiting he went next door to visit. Upon returning he found the fire had gone out and the whole place smelled like diesel fuel. He sprayed some of his wife’s inexpensive perfume in the house to kill the odor. The poor man was on prescription Antabuse. And we all know what that active ingredient in cheap perfume is! So, he had a normal reaction. 5 hour transport to the hospital in the storm. With the LEO on board.

Working at a summer camp when a teenage girl came into the health center complaining of neck pain. I Asked her what she was doing when the pain started. She stated she was playing a game. “Did you fall and hit your head or neck?” I asked. “No”, She answered. So what was the game? She and the other participants had taped a pedometer to her forehead and then rapidly shook their heads front to back to see who could get the highest number in 3 minutes. I asked the important question…did you win? She answered with a grimace…yes I did. Applied c-collar and had her transported to doc in the box (urgent care) for x-rays. You’ve gotta love teenagers…

Called to seizure in front of grocery store, PD is on scene with a male laying on the sidewalk. Easily recognized subject was not seizing but trying to convince PD to avoid arrest (incarceritis.) I looked down and there was a pretty nice pair of sunglasses laying next to the subject. My mention of removing the sunglasses to avoid damage prompted the subject to quickly reach out and grab the glasses and quickly return to a poor rendition of the chicken dance. Both officers started to laugh and my mention to my partner of “I think we’re done here” miraculously brought the subject to full consciousness. PD picked the subject up from the ground and the fight was on. I hope he didn’t break his sunglasses during the struggle.

Responded to a call for a lady with cellulitis to the right leg at an assisted living facility. She had several bags she wanted to take with her: purse, meds, some toiletries, and I think the last one was clothing. We piled all the bags in the hallway outside her door and assisted her out to the stretcher in the hallway. Once she was on and secured my partner grabbed all the bags and piled them on the stretcher while I started with vitals and secondary assessments. We get her to the hospital and I go to move the bags into the room while waiting for cleaning to be finalized. I took five bags into the room. The patient said she only had four bags and wanted to know what that other bag was. It turned out that my partner had picked up every bag in the hallway, including the patient’s next door neighbor’s garbage, and brought it along for the ride.

I run on an IFT rig, this call was a discharge from hospital where we had patient’s medications, belongings, and discharge instructions. It was a long transport. After I finished filling out their report and a set of vitals, I sat in the captain’s chair. I had some candy in my pocket and decided to eat it. Had this trend going, take vitals then some more candy. The call is over, go on throughout the day, run some more call, and go home. Now comes the next morning, I’m called into my boss’s office. They are absolutely angry, asking me what I was doing on the call. I told them I did my job. They grew angrier as they insisted I was lying, threatening to call the police. I asked more in detail as to what even happened, I was told nothing. Police arrived and they began to build a case against me. Not until then did they tell me that I was stealing a patient’s stuff, more importantly eating their medication. I couldn’t stop laughing. I casually pull out the packet of tic-tacs, fruit flavored ones. I’ll never forget that day, the day I almost got arrested for eating candy.

What’s the funniest thing you’ve seen in EMS? Let us know here and it could feature in next months edition!