EMT Jokes are a great way of injecting some humor into your shift! Here are 50 of the best EMT Jokes and Paramedic Jokes!

A warning: EMTs and Paramedics often use dark humor to help us get through the tough parts of our job. The following EMT Jokes and Paramedic Jokes may be seen by some as offensive, distasteful or rude. Read on at your own risk.

Upon arrival the EMTs find the man laying unconscious in bed, his enormous erection clearly visible under the sheet. Finding an empty bottle of Viagra on the bedside table, the EMT says “Ma’am, it appears your husband may have overdosed on Viagra and is in a coma. How long has he been like this?”

“About 4 days” she replies.

“I ran out of lube this morning”

2. What do you call a couple of EMTs?

3. Why did the pirate decide to become an EMT?

He was excited to do CP-ARRRR!

4. An EMT is treating an elderly man suffering from a heart attack at his home.

The medics get him on the stretcher and load him into the back of the ambulance when they stop to ask the mans wife a few questions.

“Now just start at the beginning and tell me what happened”
The old woman nodded and started to speak…
“Well, we were having sex”

The EMT looked visibly surprised to hear this and stopped the woman there to warn her of the risks that it could have at their age
“You really shouldn’t be doing something like this at your age, things could have gone much worse”

The old woman, feeling quite ashamed, tried to defend the act.
“Well we thought we were safe by sticking to our rule! Listen for the church bells and it was go in on the DING and out on the DONG”
The medic looked obviously confused.

“That doesn’t sound too strenuous, is there anything else that could have caused this?”
The old woman stopped for a moment then started to get flustered.
“He would have been fine if it weren’t for that damned ice cream truck!”

5. Why are EMTs really good at trivia?

They’re always the first to respond!

We were in a car accident and my dad lost a lot of blood. The Paramedics and EMTs arrived and tried to save him but nobody could remember what his blood type was. Even as he died, dad kept telling us to “be positive” but it’s hard without you here Dad. Hope you’re in a better place.

As the EMTs load a critically ill patient into the ambulance, he asks them if they are taking him to the local medical centre, or a larger hospital.

“Neither” says the EMT, “You need expert medical help, so we’re taking you to the Facebook comments section.”

I wish someone told me that before I became an EMT…

But it can muffle the sound!

10. What did the paramedic say to the the left sided stroke patient?

“You’re going to be alright…”

On arrival they find a Ferrari rolled on it’s side with its driver trapped in the vehicle, screaming “My car! My beautiful brand new Ferrari!”

The paramedics approach and the patient asks “do you think they can repair it?” – as the paramedic is about to speak, he looks down at the patient and sees he is missing his arm.

Don’t worry about the car sir, you’re missing your arm!”

The patient looks down where his arm should be and starts screaming “MY ROLEX, MY BEAUTIFUL ROLEX!”

12. What’s the difference between god and a paramedic?

13. As a paramedic, I’ve learned that there is something you can never say with a straight face:

I’m having a stroke.

15. What did the alien paramedic say when he first arrived on Earth?

“Take me to your bleeder.”

Blonde says to the paramedic, “I think I have concussion.”

Paramedic asks the blonde, “How many fingers have I got up?”

Blonde screams, “Oh my God, “I’m paralyzed from the waist down.”

17. Two paramedics in an ambulance were called to a church early one Sunday morning.

After arriving they speak to the pastor and he takes them to the belfry. On the floor of the belfry is an armless, legless man unconscious on the floor.

The first paramedic asks the pastor what happened. “This is our bell ringer.”

The first paramedic asks how he can do the job without arms or legs.

“Well,” said the pastor, “he grabs the rope with his teeth and jerks his body around. It appears that he struck his head on the ground.”

The first paramedic leans over to the second and asks, “Have you ever heard something so strange?”

“What’s even crazier,” says the second paramedic, “I think I might know this guy.”

The first looks at his partner in disbelief, “No way. How do you know him?”

“I don’t remember exactly,” says the second paramedic, “but his face sure rings a bell.”

18. My dad died last year when my family couldn’t remember his blood type in time for the paramedics to give him a blood transfusion.

As he was dying he kept insisting, “Be positive!”, but it’s difficult to be positive without him.

19. An ambulance was called to a local restaurant

“Oh, we’re fine. We both have epilepsy, but we don’t let it interfere with our work. This always happens when we finalize a job.”

“What do you mean?” asked the paramedics.

“I’m a salesman for my company, he’s the buyer for his. We just completed the deal, so we had to shake on it…”

20. How did the paramedics know Paul Walker had clean hair?

They found his head and shoulders in the glove box

21. A man is considering a career change so goes for a ride-along on an ambulance

After meeting the EMTs he’s joining for the shift that day they get their first call, a child is choking in a nearby restaurant. They get in the ambulance and rush to the scene.

When they go in the restaurant the boy is blue and not getting any air, and the EMTs are left speechless when the man on his ride along pushes past them and begins slapping the child’s back until a giant lump of meat flies out of his mouth with a large cough.

After the boy is OK, the EMTs ask the man “You were so quick to jump in there, how did you know what to do?” “well” replied the man, “I used to work for the IRS.”

22. An older, attractive lady has a seizure on her front yard

23. Why do firefighters spray water at a car accident?

So the paramedics have something to walk on.

24. What do you do if you respond to someone having a seizure in a bathtub?

Throw in your dirty laundry.

26. What’s the most important exercise for paramedics?

27. A paramedic moves from Rome to the USA

On his first shift in the states he’s working on a car crash victim and decides he needs to establish a line to give medications.

He turns to the EMT and asks, “can you help me set up for a four?”

28. A guy was cutting with an acetylene torch when suddenly there is a break in the line.

The acetylene starts shooting up his arm and a stray spark ignites it. His arm bursts into flame. He starts running around the shop waving his arm around while it’s on fire until someone hits him with the fire extinguisher.

After the fire is out and the EMT’s arrive, the police are there taking statements from the witnesses. When the officer finishes this, he pulls out his handcuffs, goes over to the burned guy on the ground, pushes the EMT out of the way, and arrests the burned guy.

The EMT asks him why he arrested this guy when he clearly needs medical attention. The officer responded by saying “He was waving a firearm in public”

29. How did the combat medic get hired at SeaWorld?

He told them he was a marine biologist

30. Why are so many medical examiners hired on January 1st?

31. An EMT decided to go to medical school so he could make more money

After years of med school, and specialist training he’s finally working as a paediatrician, where he mostly does circumcisions. He still doesn’t get paid all that well, but at least he gets to keep all the tips.

32. I was going to tell a mean joke about EMTs…

But I didn’t want to get… carried away…

33. What does a gay man and an ambulance have in common?

They both get loaded from the rear and go whoo-hoo!

34. The paramedic delivers a baby … and the three-year-old sister helps!

Due to a power outage, the house was very dark so the paramedic asked Kathleen, a three-year-old girl to hold a flashlight high over her Mommy so he could see while he helped deliver the baby. Soon, little Connor was born. The paramedic lifted him by his feet, spanked him on the bottom, and the baby began to cry.

The paramedic then asked the wide-eyed three-year-old what she thought about what she had just witnessed. The little girl quickly replied, “He shouldn’t have crawled in there in the first place! Spank him again!”

35. A man rushed to dial 911 one evening when his wife displayed early signs of a stroke.

“Don’t worry, sir,” reassured the dispatcher. “Emergency services are on their way. Just try to remain calm and stay with her until they arrive.”

“How long will the ambulance be?” the man asked.

“About eighteen feet,” replied the dispatcher.

Like our EMT Jokes? Check out our Best EMS Pick-up lines! 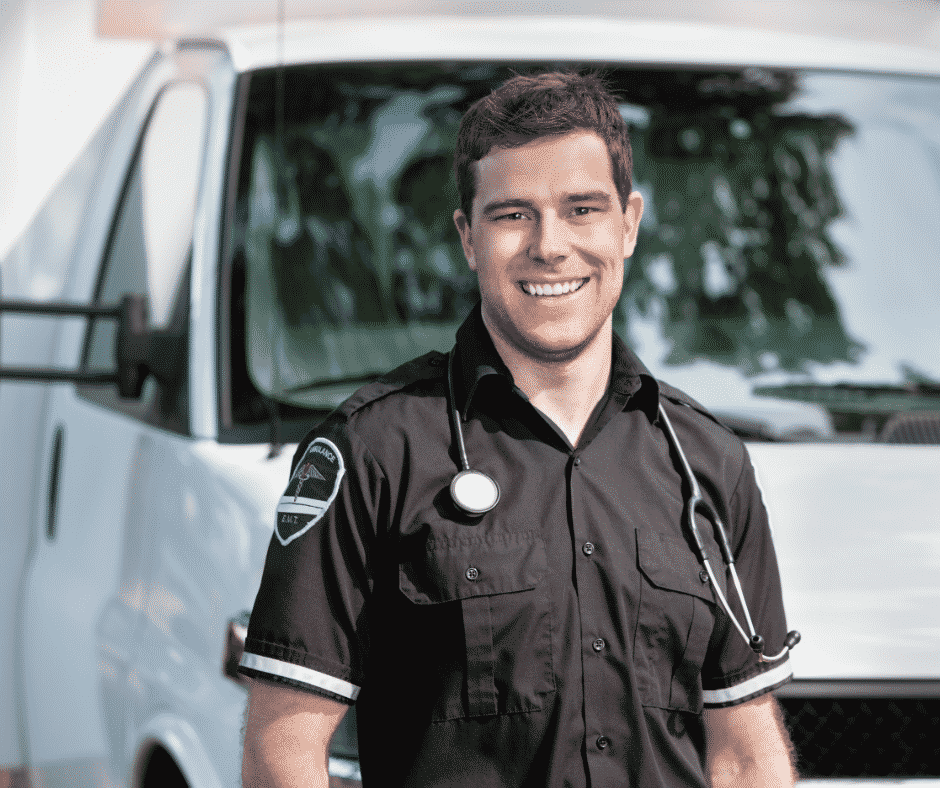 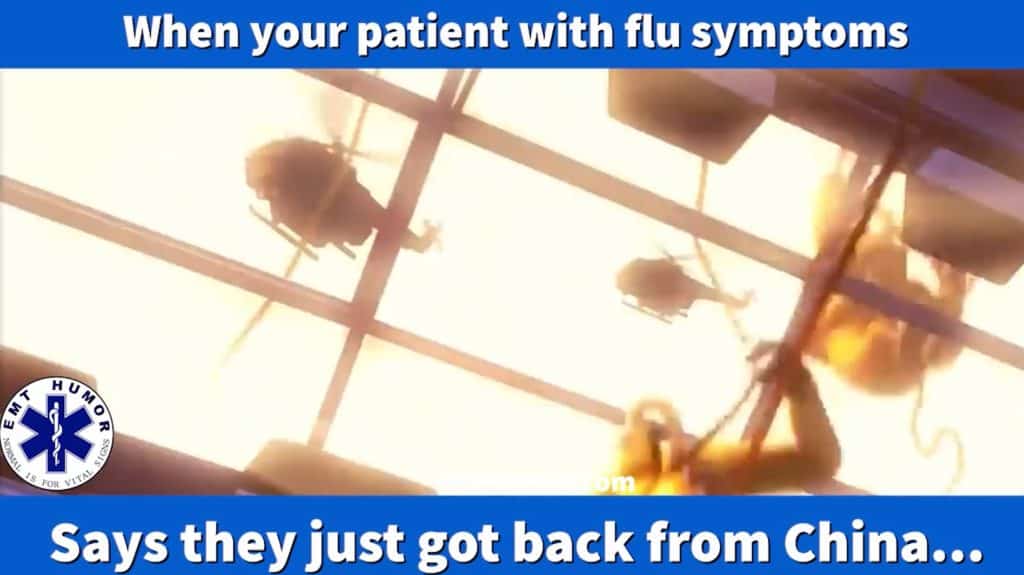